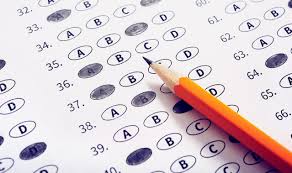 When you think of standardized testing, many people think of the time they had to sit with their eyes glued to a screen while they were tested on information that does not accurately represent their academic ability and success in the classroom. Standardized testing is any form of test that requires all test takers to answer the same questions, or a selection of questions from common bank of questions, in the same way, and that is scored in a “standard” or consistent manner, which makes it possible to compare the relative performance of individual students or groups of students. Standardized testing is basically a tool that will allow teachers to see how their students are performing compared to others in the country. This will help them revise their teaching methods if necessary to help their students meet the standards. Although this seems like a really helpful tool, not only for teachers, but also for students who would like to check their progress, it may not be all that it’s cracked up to be.

The excessive utilization of standardized tests in no manner implies or suggests a higher accomplishment. The essentials of this debate are easily comprehensible: Standardized tests are not a high-quality predictor of college success. Standardized testing sends the degrading message to students that the wide expanse of human knowledge, learning, and intelligence can be measured and condensed into three mind-numbing hours of applying memorized formulas, searching for subjective answers to reading comprehension questions, and defining words they’ll never use in real life. Rewarding students who are good test takers and penalizing those who think more creatively, is dehumanizing and it teaches our children that their test taking abilities will make or break their future.

On January 8, 2002, President George W. Bush signed the “No Child Left Behind” policy into law. Shortly afterward, standardized testing was taken ridiculously serious, leaving us with stressed out students and exhausted teachers. During this time, teachers were forced to “teach to the test” when their pay was threatened, while students who thought in much more critical ways failed to demonstrate their skills in a certain subject. School administrators were pressured into placing more emphasis on certain subjects that many other crucial subjects were left in the dust because they were viewed as “unimportant.” Standardized testing has reduced teacher creativity and the appeal of teaching as a profession, creates unnecessary stress and negative attitudes toward schooling, and it wastes the vast, creative potential of human variability.

According to a research study conducted by Massachusetts Institute of Technology, Harvard University and Brown University, they tracked nearly 1,400 eighth grade students in the Boston public school system, including traditional, charter and exam schools. They found overall that even though some schools successfully raised their students’ scores on the Massachusetts Comprehensive Assessment System state test, that improvement was not associated with an increase in what’s known as the students’ “fluid intelligence.” These skills are described as fluid because they have more to do with logical thinking and problem solving, rather than recalling previous learned information that everyone was exposed to. Standardized testing is an absolutely ridiculous way to test college readiness when these tests are based on “common knowledge” rather than learning and reflecting on that to become smarter and more successful. As a society, we rely heavily on test scores for reference to how well we will do in the real world when the reality is, we as students are not defined by a test. Our nation should allow students to demonstrate their understandings using methods that are appropriate for them, and should trust teachers to evaluate their own students. The schools of nations with the best education systems emphasize not scores on standardized tests, but understanding individual students, closing achievement gaps, and holding teachers accountable.

Supporters of standardized testing argue that it is an objective way to compare students, claiming that the grading systems of teachers is subjective and therefore not reliable to show students’ potential in the classroom. This argument is comical and weakened by the fact that students will always be different kinds of thinkers and therefore will naturally express themselves differently. For example, a student might be a gifted public speaker but struggle with putting their thoughts on paper. Even though the student might know the material, they wouldn’t be able to demonstrate their skills and would be penalized for their natural weaknesses. Standardized testing is ultimately useless in the sense that students are not being tested on the information they should be learning, they are being tested on their common sense. Relying on common sense rather than teaching new ways to approach a problem or question makes it difficult for a test to be accurate and show how well a student will succeed in the real world.

Standardized testing creates unnecessary amounts of stress in students and has spiked a lot of pressure on teachers. In order for children to succeed, students must be seen as individuals with individual strengths and weaknesses, rather than mindless robots racking up points on a test that supposedly determines how well you will do in the future. The students of today will soon be leading America. If we all want the future of America to be bright, we must teach multiple life skills and important knowledge that we will actually use in life rather than wasting our time preparing for tests that will not benefit us. Globally, the culture must change so that standardized test scores no longer define the way we see student intelligence or potential.