Juniors out spike the seniors in Buff Puff 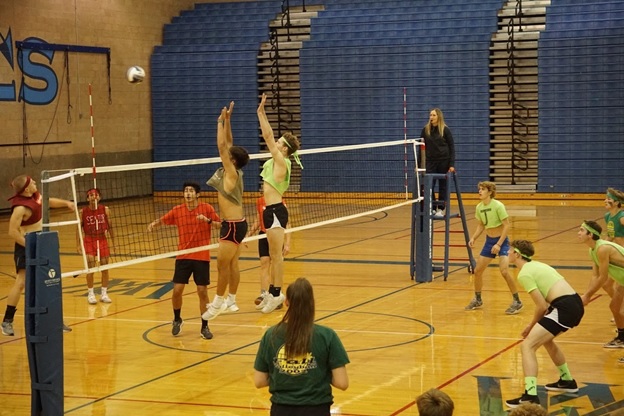 Everyone knows that the week of Homecoming is filled with excitement and anticipation that leads up to the dance that is held Saturday night in the WA-HI gym, but homecoming week has much more to offer than just fancy dresses and tuxedos.

On October 7 at 7:00 P.M., the Senior and Junior boys came together for a not-so-friendly match of volleyball to see who would take home the title of best class. The rivalry between the two classes has been going on for years. Every year, the eager, wide eyed Juniors come out hungry with a craving to defeat the upperclassmen, and the seniors come out with sparks of energy, inflamed to uphold their title.

At WA-HI, everyone takes spirit week very seriously. So, as you can imagine, there was a lot of preparation that led up to the intense match. The WA-HI Girls Varsity Volleyball team split up to whip the boys into shape and lead them to success. Half of the girls trained the Juniors, and the other half trained the Seniors.

Varsity setter, Monica Miller who is one of the coaches for the Senior boys stated, “There is no doubt that the Juniors have a stacked team, but we have more experience so I think we will be more level headed. I think we will be able to pull out a win because the boys have been practicing hard, so I am really excited to watch them succeed.”

On the other side of the competition, Varsity middle hitter, Addi Baker who is one of the coaches for the Junior boys, stated “I am pretty confident that the Junior team is going to beat the Seniors. We have been practicing a lot and the boys really work well together, so it should be a really exciting game.”

After all the hard work, both sides were eager and ready to take the court. Students from both the Junior and Senior class came ready in their class colors to support their classmates and cheer their team to victory. There was definitely some tension, not only between the boys playing, but the students in the student section as well. Everyone was waiting with anticipation to see which class would come out on top.

The Buff Puff game is the best 2 out of 3 matches. Once 7:00 hit, the starting lineup on both sides were ready for action.

The Seniors started with the ball in their court. The Seniors started strong with a killer serve over the net, but that didn’t shake up the Juniors one bit. The juniors scored the first point, and after the first play of the game, you could tell that they had a goal to win the title of best class. The Juniors set the tone early, and the intensity, determination, and excitement they had pushed them to win the first match over the Seniors in a final score of 25-12.

The Seniors, angry about the outcome of the first match, were very eager to lay everything out on the line, so when it was time to make or break it, they rose to the occasion. The Seniors bounced back in the second match and scored the first point against the Juniors. They had a good tempo going, and then, things began to go downhill.

The Juniors gave up no ground against the seniors in the middle of a very close 10-12 point game. The Seniors looked as if they were starting to work together and communicate, and then the Junior squad started to use their power and strength to spike down the ball. The Seniors had a lot of trouble handling the force and speed of the ball that they weren’t really sure what to do. At this time, the Juniors started to pull ahead.

After a 50 minute game, it was the Juniors that came out on top in a 25-21 point victory. When asked about the outcome of the game, Senior Cristian Sanchez stated, “It is very disappointing because we should have won. We were really confident that we would win, so it’s unfortunate that we didn’t come out on top, especially senior year.”

Although the Seniors were disappointed about the outcome, the Juniors stormed the court to cheer on their winning class. There were many smiling faces and a lot of loud cheers to make sure that everyone in the room knew who was the best team. Junior, Joe Terry who was an outside hitter for the winning team said, “There was a lot of buzz around the game and it felt great to go out there and come out on top.”

The Juniors may have won Buff Puff, but on Wednesday October 9, the Junior and Senior girls will go head to head in the annual Powder Puff football game that will take place at Borleske Stadium with kickoff at 7:00 P.M. Come support in your class colors to see who will come out on top.