Blue Devils set the tone for the rest of the season 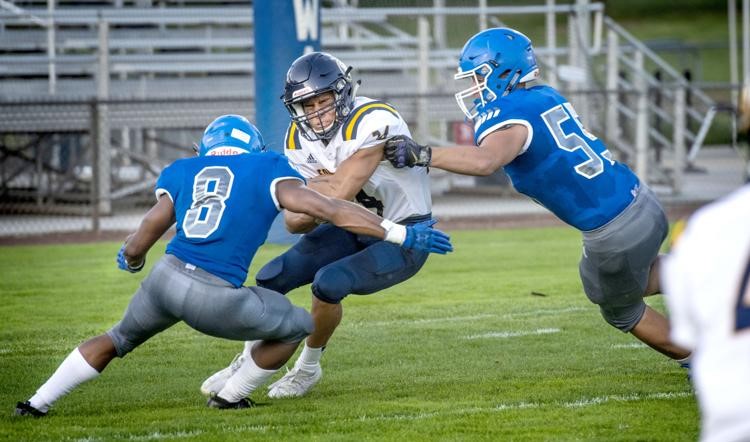 On Friday night, the new generation of WA-HI Blue Devils took the field with a new fire lit inside of them. There has been long anticipation to see how well the Devils will match up against some of their opponents this year, so when the time came, fans were packed in tight to support their home team. Borleske Stadium never looked so good.

The hard work that led up to the 36-16 victory did not just come from a sudden stroke of good luck. The new WA-HI football coach, Greg Lupfer, has completely flipped the rag tag group of boys into well oiled machines. Lupfer was hired in late February after Erik Hisaw announced that he was going to resign as the Devils head football coach. Lupfer has about 24 years of experience, mostly at the collegiate level, so when he obtained the job he was eager to work with young talent.

WA-HI starts off their season with about 79 players, 8 being seniors, so when asked about how Lupfer feels about having a younger team this year, he said “I think it’s great we have a young team this year because it says our future is bright. I want to teach these kids lessons that they will carry with them for the rest of their lives.”

Coach Lupfer is very excited to keep rolling and he is ready for the boys to keep winning. He has big plans in store for the rest of the season. “My goal is to win and to establish a good football program that people are proud of.” He says. “There is always room for improvement, so for our team, we’re really hitting it hard and focusing on taking care of the football and not making coverage mistakes on the defensive side.”

Lupfer’s coaching style is mainly focused on staying humble and just getting the job done. When asked about how he feels about the new football coach, Senior Dylan Ashbeck, Blue Devils tight end, said, “I love Coach Lupfer. He’s a nice guy and he brings a lot of stuff to the table that we aren’t used to and he makes us work hard.”

Not only was Friday’s game the first win of the season for the mighty Blue Devils, it was also the first home win at Borleske in 3 years. “I think it feels great to put our mark on history. Especially senior year, because that’s a big deal” says Blue Devil Senior, Anthony Parish.

Memories and history was made Friday night, but the one big highlight about Friday’s game was the amazing support the Devil’s got by their very own student section. Blue Devil students were packed in tight wearing all black to cheer their team to victory. Compared to last year, “I’d say its a lot more fun, a lot more hype, and very interactive.” says, Senior Isaac Aguilar who attended the football game. After their stellar performance, Isaac says, “I’m going to be at every game this year.”

The Blue Devils will take on the Hanford Falcons at Fran Rish Stadium Friday, September 13 with kickoff starting at 7:00 P.M. The Blue Devil’s are excited to come out and keep their winning streak going.